I did quite a bit of journaling through the time when I was coming to recognize my reality. I would like to share some of these entries with you as a window into what it means to come out. Please come back to read through the rest of the journey. If you haven’t read the first, you can click here to be redirected to that post, called Truth. From there, at the bottom of each post you can navigate to the next.

Today is Wednesday. On Monday I took another trip to Value Village to return the clothes that didn’t fit from the last trip. Haley was out of town, so I went by myself. As it turns out, it wasn’t “You can return things within 14 days,” as they said. It was “You can exchange things within 14 days.” I didn’t know the actual value of what I was returning, except it was over $120. I didn’t keep track of what I was choosing (again). So the Spirit gave me another day of shopping without being guided so much by cost.

Two significant things came from this trip. The first is that I finally got up the nerve to just try some men’s pants. I took a guess at a size, found 3 pairs that I thought would be suitable especially for work, and chose them. They fit! They’re a little snug (next time I’ll choose the next size up just to see), but actually comfortable! I always thought that my body wouldn’t do well in men’s pants. I’m still always thinking of my belly – when I’m trying to be a woman, it’s not feminine enough, and apparently, when thinking about clothing, it’s not masculine enough. I have three pairs of men’s pants that I will feel comfortable wearing to work! Including a pair of green corduroys! I love corduroy! It has not fit with the feminine style I was trying to create, though (not to mention I haven’t seen any in women’s clothing for years).

The other thing I found was a pair of red shoes. Not particularly feminine, not particularly masculine. My first thought was, “I like them!” My second thought was, “They’d actually work with what is emerging as my style.” I was so excited! I could see something I like (first thought) and not immediately write it off as unsuitable (second thought). How euphoric as I stood there considering, not whether they were too unfeminine or too casual, but whether they felt comfortable and making sure my first thought of liking them carried through the next minutes. It’s almost a new experience to have something I like add flair to my wardrobe in a way that makes me comfortable. I’m having a hard time capturing what I felt and what I mean. I have had so many filters for my wardrobe for so long, it was euphoric to come across something that I could choose with only two filters: are they comfortable? do I still like them?

How do I describe choosing clothes until now? I was trying to explain it to Barry just now as I took a break to walk the dog with him. I have read of binary trans people’s experiences when they first come out, and it resonates. Some people have described their exploration of their new gender expression as hyper-masculine when coming out as a trans man, or hyper-feminine when coming out as a trans woman. They describe an inner sense of unfamiliarity with how to choose clothes, a kind of sense of character acting. That’s how I’ve felt choosing clothes as a woman. When I saw those red shoes and thought, “I like them” and didn’t immediately follow it up with all the reasons they wouldn’t work in my wardrobe, I thought, “Maybe I do have a style, but I’ve never felt like I could/was allowed to enter fully into it.” The door cracked open a little more to a whole new world. Just a glimpse.

Later on Monday I cleaned out my closet. Some things were easy to add to the giveaway pile – they were the best I could come up with in a compromise situation (I really should have some blouses in my wardrobe, I don’t mind the pattern of this fabric, the sleeves of this are long enough). Others took some thought. I enjoyed wearing them. They made me feel like I had successfully found a way to present an acceptable version of a woman. When I think of how I want to dress in future, though, they don’t really fit. It’s all piled up outside the closet. It’s a bit of a buffer time to make sure I’m not overreacting or acting too quickly. Sort of like the advice to make a decision and then sit with it for a time without acting on it to see how it feels. A part of me is worried about appearing professional enough. Then I think of people who have truly unique styles and how they somehow navigate their working world. I even entertain the possibility that maybe, just maybe, I’m someone who has had a particular, recognizable style all along, I just haven’t felt the freedom to inhabit it. 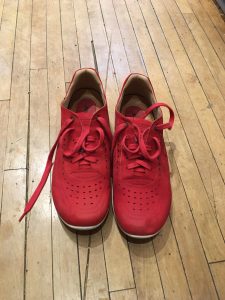 Join me in the journey.