I did quite a bit of journaling through the time when I was coming to recognize my reality. I would like to share some of these entries with you as a window into what it means to come out. Please come back to read through the rest of the journey. If you haven’t read the first, you can click here to be redirected to that post, called Truth. From there, at the bottom of each post you can navigate to the next.

Today I got my hair cut! I have been counting down the days for quite a while. A haircut is the first thing I was sure I wanted to do to physically change my appearance after I came to know I am non-binary. That was just before the whole world went into lock-down. As soon as Saskatchewan allowed hair salons to be open again, I made an appointment. Then, at the very moment I should have been leaving the house to go to that appointment, a family emergency came up and I had to cancel. I am so thankful my hairdresser has compassion and it only took another 3 weeks to see him.

Before I could make an appointment to get my haircut, I wrote my hairdresser a letter. I have been seeing him for a number of years. I wrote to tell him about my realization of my non-binariness, but also to tell him I now have more insight into why I’ve stuck with him through a location change that means I drive, not the 5 minutes it used to be to get to his salon, but an hour on the highway. I came to recognize that hair salons had always made me uncomfortable because of their very gendered set-up. Men go to a barber and women go to a salon. I always felt very uncomfortable and vulnerable there. The situation really highlighted my internal discomfort with performing as a woman. The first time I saw my current hairdresser, we hardly spoke. One of the pressures I felt was the stereotype that women open up to their stylist. I never knew how to do that. Yet, he didn’t make me feel uncomfortable in the silence. That was enough for a second visit. I asked some questions about how to style the cut he’d given me, and he wasn’t condescending, or snide or rude (all of which I have experienced when asking questions in that setting). I was hooked! Someone who could let me be, and who respected me despite my lack of hair styling knowledge. I wrote to tell him how much I appreciated that. I told him that with my newfound identity, I had a heightened appreciation for how he has treated me all these years. We do talk a lot these days. We are almost the same age, but he grew up here in Saskatchewan and I grew up in Ontario. We compare notes about the differences. He is gay, so we’ve had a lot to talk about as members of my family have joined the LGBTQ community. He’s married, so we talk about that.

When I went for my appointment this week, there was no awkwardness. There was no sense of shame on my part, no fear that I would have to explain any more than I already had. And he was absolutely as supportive, interested and encouraging as always. I would not have entrusted this transformation to anyone else.

I am including two new things on this post! I am including a before and after picture of my hair so you can see the change. See below: 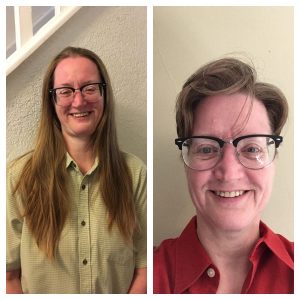 And I’m including a link to a spoken poem that I highly encourage you to watch. The poet is a young non-binary person talking about the vagaries of trying to get a haircut when you’re neither man nor woman.

Join me in the journey.